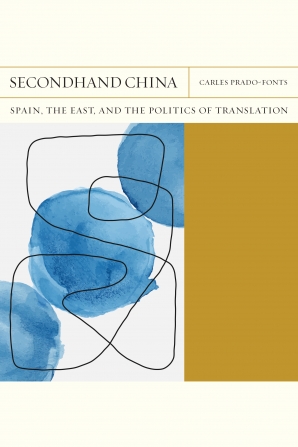 “Combining nonexistent authors, taboo topics, imaginary journeys, Borgesian paradoxes, Bakhtinian phantom dialogues, dime novels, and journalistic forgeries, this account of reflections on an empire in crisis from another empire in crisis has nothing shopworn about it. Carles Prado-Fonts’s ingenious book twists the ‘East-West’ topic formidably out of shape.” —Haun Saussy, author of Translation as Citation: Zhuangzi Inside Out

“A valuable contribution to several fields, Secondhand China will be consulted for many years to come. Its nuanced readings of Spanish- and Catalan-language materials reveal significant but often overlooked transnational dimensions of those literatures, but also bring new insight and ideas to broader debates about translation studies, Orientalism, and world literature.” —Christopher Bush, author of Ideographic Modernism: China, Writing, Media

“Secondhand China tells the fascinating story of how Spain, a minor European country and thus part of the ‘rest of the West,’ wrote about China in the nineteenth and early twentieth centuries. Through this new lens, Prado-Fonts proposes a more capacious scope for the working of translation and more complex scenarios for mapping intercultural connections. This is a welcome challenge to key concepts in the fields of comparative literature, European studies, translation studies, and beyond.” —Andrea Bachner, author of Beyond Sinology: Chinese Writing and the Scripts of Culture

“Secondhand China is a remarkably original examination of how originality itself is created out of second-handedness, and specifically the way that late nineteenth- and early twentieth-century Spanish and Catalan authors perceived (and celebrated) their own mediated relationship to China. Part literary analysis, part intellectual history, and part translation theory, Secondhand China offers an exciting new model for doing cross-cultural studies.” —Carlos Rojas, author of Homesickness: Culture, Contagion, and National Transformation in Modern China

This transcultural study of cultural production brings to light the ways Spanish literature imagined China by relying on English- and French-language sources. Carles Prado-Fonts examines how the simultaneous dependence on and obscuring of translation in these cross-cultural representations created the illusion of a homogeneous West. He argues that Orientalism became an instrument of hegemony not only between “the West and the rest” but also within the West itself, where Spanish writers used representations of China to connect themselves to Europe, hone a national voice, or forward ideas of political and cultural modernity.

Uncovering an eclectic and surprising archive, Prado-Fonts draws on diverse cultural artifacts from popular literature, journalism, and early cinema to offer a rich account of how China was seen across the West between 1880 and 1930. Enrique Gaspar, Luis de Oteyza, Vicente Blasco Ibáñez, and lesser-known authors writing in Spanish and Catalan put themselves in dialogue with Leo Tolstoy, John Dewey, W. Somerset Maugham, Bertrand Russell, Pearl Buck, and André Malraux, as well as stereotypical figures from popular culture like Fu Manchu and Charlie Chan. Throughout, Prado-Fonts exposes translation as a technology of cultural hegemony and China as an appealing object for representation. A timely contribution to our understanding of how we create and consume knowledge about the world, Secondhand China is essential reading for scholars and students of Orientalism, postcolonial studies, translation studies, comparative literature, and cultural studies.